The Visual Identity of a Party

Brief remarks about the logo of a new political party / alliance, the Right Romania Alliance:

ARD – Acronym for the Romanian Development Agency – an institution (or a former institution) of the State; ADR – Regional Development Agency; ARDDZI – Romanian Agency for Sustainable Development of Industrial Areas; this can lead to possible confusion and / or the impression of lack of imagination when it comes to choosing names. Acronyms like ARD are very common, as acronyms beginning with an A are directly associated with a State Agency.

The letters ARD are of the serif type (i.e. they have endings) as opposed to those designating political parties (PDL – Democratic Liberal Party, FC – Civic Force, PNȚCD – Christian Democratic National Peasants’ Party) which are written in sans serif, which leads to a visual inconsistency. Serif letters are usually associated with something old, traditional and are part of the collection of old fonts, determined by the form of old patterns made using lead. Sanskrit letters are modern, simplified, typical of the modern printing age and are the result of a contemporary visual language.

In the political field, the heart has long been awarded as a symbol by the Democratic Forum of Germans in Romania.

Visual language: sharp, pointed, the heart is drawn like a ribbon without thickness and volume, as it is usually perceived; the two stripes that cross the heart are: very sharp and section the heart; they look like a road (lane), they are just as sharp and curved in the logo of CNADNR, an institution that is responsible with roads.
The border surrounding the set of symbols shows that those symbols could not have formed a cohesive logo and the need for a graphic element (contour) was needed in order to link them.

The arid black and white monochrome does not favour the design at all; on the contrary, it amplifies the impression of something cold, sharp, distant, unidimensional (without volume, perspective).

Let me be clear, I should mention that this article is referring to design (and positioning), and not politics. 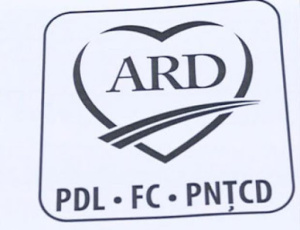